Eric Poe started attending CoderDojo KC during its second session, and since November 2013, he has remained an active volunteer. Today, as Director of Curriculum, Poe said he enjoys seeing the children learn and seeing “the light bulbs” come on in their early development work, as well as his own networking with other mentors. 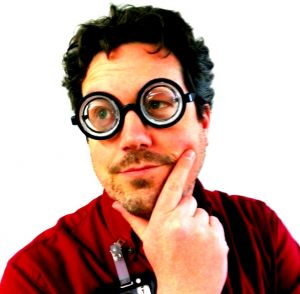 “I enjoy seeing the kids work hard to learn something, build something out of it, and then present it after three hours,” he said. “Seeing the joy of the kids as they show off their hard work is what kept me coming back.”

Poe has worked as a Programmer Analyst for three years at Stowers Institute in Kansas City, and previously, he worked for 15 years in a public school district as a manager of information technology. He graduated with his bachelor’s degree in Information Technology from the University of Missouri-Kansas City in 2012, as he studies in the evenings while working full-time during the day.

Poe’s hobbies outside of work and CoderDojo KC include spending time with his family, watching Kung fu movies, and studying. “I try to devote at least an hour per night of studying various topics: usually programming, but I also work on studying foreign languages,” said Poe, who also is an organizer of Kansas City’s PHP User Group.

How did your interest in coding begin?
My grandfather sent me a book on BASIC when I was a teenager. He thought it would be cool if I became a developer. I read it. I did a few things. I took a class on it in high school, and I couldn’t really see myself becoming a developer. A long time later, I started doing tech support for Gateway 2000 and learned about the Bachelor of Information Technology program at UMKC. I thought that would be a good fit for me. I went into that hoping to get more information technology knowledge, but mainly, it was just a programming thing. At some point, during that degree program, I started to enjoy the programming side of it and the challenges that it provided.

How has your technical knowledge transferred into other aspects of your life?
I have recently started going to conferences as a speaker. So, that has certainly helped.

What do you enjoy most about your work?
I enjoy having big problems that we can then divide into smaller problems and divide among the team. I enjoy it when people appreciate using the tools that I built for them. I enjoy the social aspects of programming, as well.

What are the more challenging aspects of your career?
Figuring what people are asking for when they are asking for something – their ideas change as the project becomes more mature. It’s challenging, but I also enjoy it; it’s all the same.

What advice would you offer your younger self today, or to someone who is looking to shift careers into one more coding-based?
It’s OK, to try out something, but once you’ve decided to do it, go all in. Learn what you need to to get the job done, but also learn much more. I didn’t start enjoying programming until I dove into my studies and learned the whys and the whats, which allowed me to play with the code with a deeper understanding. Also, attend a local user group that deals with that topic – there you can learn from others, ask questions, and discover neat things about the topic you’re learning.

If you could tell the general public one thing about software engineers and what it means to write code, what would it be?
It is a social activity. I think the lone the developer in mom’s basement is a myth, or rather, an outlier rather than the rule. In writing code, you’re writing it more for other people to read rather than just for the computer. The computer understands it, but it’s secondary.

How do you envision STEM continuing to evolve into our daily lives?
I think STEM, by itself, is not all that interesting, without the arts coming into play. I like to think of it more as STEAM, rather than STEM. Science is great, but science without playing or without imagination, doesn’t go very far.

Adrianne DeWeese is a Continuing Education Specialist at the Federation of State Massage Therapy Boards. A member of the KCWiT Marketing & Communications Committee since June 2016, she also enjoys pursuing a Master of Public Administration at the University of Missouri-Kansas City and serving as board chairwoman of Pages & Chapters, a Kansas City- and Washington, D.C.-based family literacy nonprofit organization. Adrianne is married to John Leacox, a dedicated software engineer, and she believes in equal educational rights for everyone and hopes that sharing the stories within KCWiT will inspire others to also pursue their dreams.