The academic path that ultimately led Annie Ingham to pursue a career in computer science begins at the University of Kansas with studies in economics, German, and international relations. 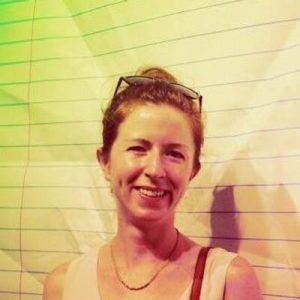 Upon graduating from KU in 2006, Ingham said she considered attending law school or studying economics in graduate school. “It’s funny because at that time, I doubted my math ability,” Ingham said, smiling. Instead, out of college, Ingham worked professionally on research projects, in addition to teaching elementary school. It was her move from Kansas City to New York in her 20s that allowed her time for “soul searching, as far as career choices go.”

While living in New York in 2013, Ingham worked as an administrative assistant, which gave her the time to learn computer science and coding on the side, in the evenings, and on the subway. The MIT OpenCourseWare Introduction to Computer Science course, Ingham said, became the course that helped her the most, as she bought the textbook and watched the videos, which introduced her to Python. She also studied front-end web development at General Assembly.

By 2014, Ingham practiced fundamental web development skills at Startup Institute, and soon after started a three-month internship at Reelio in New York. That internship then turned into a full-time role as a full stack web developer. Today, Ingham works as a software engineer at a web security startup.

This summer, Ingham is preparing for her third time mentoring at Django Girls, a free, one-day programming workshop that connects women and girls with resources necessary to build their first web application using HTML, CSS, Python, and Django. Prior to moving back to Kansas City in 2016, she mentored at the Django Girls event in New York City. She moved back to Kansas City in time to mentor for the summer 2016 event. The level of enthusiasm and organization of volunteers and the attendees “made it such a fun experience, and I thought, ‘I don’t want to miss out on this again,’” Ingham said of her continued involvement.

While applications are now closed for the 2017 Django Girls Kansas City event, you can learn more about the event online, as well as see the complete list of organizers and coaches.

How did your interest in coding begin?
When I was a lot younger, I loved to play on the computer, but then there’s a big gap when other things seemed more important at that time. What piqued my interest again was that I was working for a professor, and they needed someone to update the website. They sent me to a free HTML course, and I made three, incredibly basic updates. That’s when I realized it was possible to do, and I didn’t do anything with it for 10 years. In New York, then, I was reflecting back on what it was that I enjoyed about all the jobs that I enjoyed. I liked the analytical aspects and the critical-thinking aspects, as well as that it was ever-changing. I liked the flexibility that it could provide – you’re in demand, so you have a lot more options that way.

How has your technical knowledge transferred into other aspects of your life?
The most immediate application that I can think of is spinning up websites for friends and family. That’s a fun hobby, too, and it’s something I enjoy. It’s a little more creative, too, than the backend development.

What do you enjoy most about your work?
I love what I do, and I love the company that I work for and the people I work with. What I enjoy the most is when you’ve been working on a problem for a long time, and you get a solution, and it works. I enjoy that good feeling of being able to solve a problem.

What are the more challenging aspects of your career?
Right now, my big goal is to advance to a more senior level and to constantly evolve my skillset. Sometimes, it’s hard. For me personally, it’s making sure that I am setting realistic expectations for myself, and not growing complacent with where I am, but not getting too frustrated with where I am, either.

What advice would you offer your younger self today, or to someone who is looking to shift careers into one more coding-based?
I would say, “Do it,” first of all. Don’t be afraid to take baby steps and verify that you enjoy this. Go into it with an open-minded. Try a little bit of everything, and then focus on what you like. And, don’t be intimidated. Deep down, so many people are willing to help, if you’re willing to ask.

If you could tell the general public one thing about software engineers and what it means to write code, what would it be?
It’s a very diverse field. There’s no one person or type of person who embodies what a software engineer is. And, it’s open to everybody, and I like that. The more, the merrier.

How do you envision STEM continuing to evolve into our daily lives?
I think if you just look at how things have changed in the last 10 years, and how we were with cellphone usage and Internet usage, and how now you can’t go an hour without checking your email or something on a website, I think it’s only going to continue to accelerate.

Adrianne DeWeese is a Continuing Education Specialist at the Federation of State Massage Therapy Boards. A member of the KCWiT Marketing & Communications Committee since June 2016, she also enjoys pursuing a Master of Public Administration at the University of Missouri-Kansas City and serving as board chairwoman of Pages & Chapters, a Kansas City- and Washington, D.C.-based family literacy nonprofit organization. Adrianne is married to John Leacox, a dedicated software engineer, and she believes in equal educational rights for everyone and hopes that sharing the stories within KCWiT will inspire others to also pursue their dreams.