"Technology is so vast and everything moves so fast, that the only thing you can be in this field is a learner." #TechTalk @KateNielsenkate pic.twitter.com/Yg9JPSvdmJ

In partnership with Women Techmakers, this month’s Tech Talk was held in celebration of International Women’s Day at SMG in the Crossroads. The panel of six speakers included entrepreneurs, community organizers, and teachers. While all women work in technology in different capacities, the topics of imposter syndrome, networking, and educating yourself were aspects that affected the growth in their careers.

Rachel Hack Merlo, current Community Impact Manager at Google Fiber, began with a career primarily in advertising. Merlo described the advancement of technology and how it affects business and organizations that are not purely technology fields.

According to Merlo, instead of dreading a change in result of technology, thinking of what situations will grow from the influence such as new skills and critical thinking can be a catalyst for driving companies, and mostly people, forward.

Ann Gaffigan is the Chief Technology Officer and partner at National Land Realty. Currently running her own freelance business, the establishment and growth of which is a signal of assertiveness for the self-described “rule follower”.

Ann escribes having a past of being a rule follower and committed computer science student and employee. However early in her career, Ann found herself at a crossroad when the opportunity to leave her full time job to work on a freelance basis. Thi gave her the chance to increase her responsibilities and impact on projects while also, inadvertently, taking the company’s biggest client with as her first solo project.

“Who knows the feeling of wondering…’What the heck am I doing?’ “ Jenny Tarwater, founder of Blueshift Innovation an agile coaching and training consultancy, describes this as the feeling of “imposter syndrome”. This experience can be common when learning a new skill or pursuing a new career. A combination of education and networking is a sustainable way to continue your path during the moments when you’re second-guessing yourself.

Inspiration and passion can serve as the primary catalyst to create a new career you may not have planned on.

Listening to Donna Miller from @DayReelHub speaking on her journey into technology with @KCWomeninTech. Support and champion local leaders pic.twitter.com/3wVbE8ZSNl

Donna’s current company was founded as the solution to an everyday hassle: the process of scheduling multiple appointments. DailyReel is an “appointment hub” to streamline your appointment scheduling into one place. The goal was to have the functionality of booking several appointments without making multiple phone calls or using different apps. Thus Donna founded DailyReel.

"I didn't sign up to be an entrepreneur, there is nothing else I'd rather do. KC is a great place to build that community." @DayReelHub 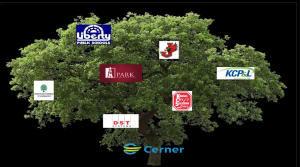 Describing her career path in technology as a “curvy tree”, Angie began her career as one of a 18 new-hire cohort at Cerner Corporation. Since then, Angie has also worked for DST Systems, Kansas City Southern and Kansas City Power and Light. Citing her passion for technology and her students, Angie uses that passion as support to continue despite being the only teacher in such a specific technology field at her schools.

Join us for our upcoming TechTalk Wednesday, April 19, at the Cerner Innovations Campus with professional speaker, Lauren Shieffer, for the a seminar on conflict resolution entitled “Before it Comes to Blows”. Learn more and register on Eventbrite.