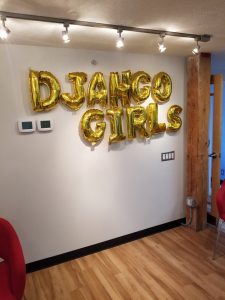 On February 16th, three Kansas City Women in Technology members set out on a journey from Kansas City to Omaha to help with the first ever Django Girls Omaha. This group included KCWIT’s Membership Chair, Tamara Copple, her husband Matthew Copple, and myself. What is Django Girls, you might ask? It is a weekend long workshop that helps women gain programming skills by creating a blog website using the Django framework. A framework is a set of tools used as a foundation for many applications. There’s a saying in development that you shouldn’t reinvent the wheel, and using tools that developers have already built, like Django, allows you to create an application in a quick, efficient manner. Django Girls workshops have taken place all over the world and are organized by developers in each community. Django Girls Omaha was organized by three wonderful ladies: Sandi Barr, Naomi See, and Anna Ossowski.

Many workshops have an install party the Friday before the workshop officially kicks off, but Django Girls Omaha decided to switch it up a bit. Instead of having participants install Django onto their local computers, they had attendees use a program called cloud9. With Cloud9, everyone has the same development environment setup which allows the participants to focus on learning the programming material instead of getting stuck on any 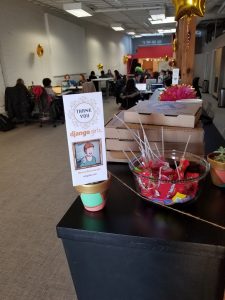 Mac or Windows specific installation issues. This saved a lot of time and attendees were able to get started working through the tutorial before lunch on Saturday. There was approximately a 2:1 mentor-attendee ratio at the event, with 10 coaches and 18 participants in attendance. This gave mentors the opportunity to get to know the attendees and learn why they decided to participate in the event. At my table, one of the attendees was a Computer Science major but had no experience working on a web app, while the other attendee had never written a line of code before the day of the workshop! It was a great reminder that Django Girls is an event that women from a variety of backgrounds can gain new skills from.

We had pizza for lunch and heard some excellent lightning talks about various career paths that are available in the tech industry. When most people think of programming, they think of sitting at a computer all day debugging code, but the lightning talks introduced the attendees to people like Tamara, who is a Business Analyst, working to bridge the gap between engineers 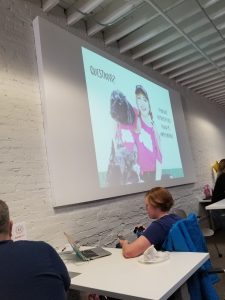 and business decision makers, as well as Jeannie North, who used the tech skills she learned in code school to build a website for her business, RipleyandRue.com. Anna spoke about her job as a Developer Advocate. She travels around the world speaking at various events teaching developers about the latest tools created by her company, Elastic, and gets people excited about programming by organizing events like Django Girls workshops. She was also an attendee at the very first Django Girls event! 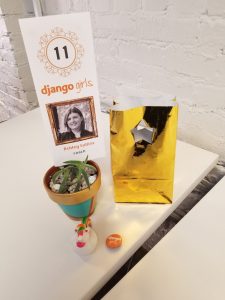 Would you like to attend a Django Girls event? Great news! Kansas City is having a workshop July 20th and 21st at the Sprint Accelerator. We’re looking for awesome women who want to take the next step in learning how to program by attending our super fun and FREE event. Are you familiar with programming concepts and want to get others excited about the tech industry? We would love to have you mentor at our workshop! Applications for attendees and mentors can be found at Django Girls KC. You can also email KansasCity@DjangoGirls.org with any questions you might have about Django Girls KC.

Ashley Sullins is a Web Developer and Attendee Coordinator for Django Girls KC.