Trying to decide to attend a Coding & Cocktails program? ALL levels and abilities are welcome! Follow along with Shireen as she learns how coding ends up being important – no matter what your profession is.

I’ve been out of high school for nearly eight years now, and to this day one of my biggest regrets is not taking any coding classes as an elective. Most of the students who took computer classes when I was in high school were regarded as losers, and I was already struggling socially. Not only that, the classes were filled up almost entirely by boys, which can be intimidating for teenage girls dealing with confidence issues (I’m still struggling with this, and I’m in my late twenties…). Besides, I figured I didn’t need to learn coding because I was going to major in music performance and journalism in college. 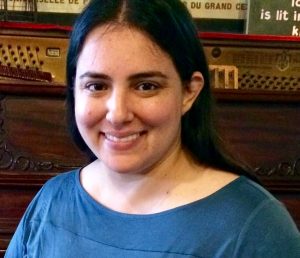 Oh, how wrong I was.

When I graduated from high school in May 2009, the United States was still in a recession and social media was in its infancy. I didn’t think much about the global changes at the time because I was too busy getting ready for my next recital or audition. I rarely used social media, so I didn’t notice the potential they would have in influencing the world. I didn’t get my first iPhone until 2012.

I quickly learned how much technology had changed over the last four years when I started graduate school for journalism. I had no idea I’d have to take courses on quantitative analysis and social media in journalism school, but I did, and they were some of the most difficult courses I had ever taken in my life. And I couldn’t deny the importance of learning technology for my career field – Data and information are constantly changing and growing. As the digital world become more complex, reporters are responsible for communicating these innovations with their audiences, a.k.a. the people who are being directly affected by these changes and may not even realize it. More investigative reporters are also now using coding skills to gather data for stories they’re working on.

I finally acknowledged a couple of years ago that I needed to learn coding to become a better journalist, but I opted not to take any coding courses in graduate school because 1) they’re expensive and 2) I didn’t want to potentially ruin my GPA if coding didn’t come easy for me. I decided to wait until after completing graduate school to look for coding classes.

Shortly after graduating from journalism school, I moved to Kansas City for a 6-12 month journalism internship. Once I got settled into my new living and work situation in January, I started looking for affordable evening and/or weekend coding classes in the area. One of the first options I found online was Kansas City Women in Technology’s Coding & Cocktails, an introductory coding program for women that meets once a month. During each four-hour session, women will learn new coding skills while enjoying dinner and unique cocktails. This looked like the perfect opportunity for me. I couldn’t get off the waitlists for the January and February sessions (HTML and CSS), but I was fortunately able to attend the Command Line session in March.

I’ll be honest, I had never heard of Command Line before until I signed up for the course on Eventbrite. I just wanted to learn any aspect of coding I could. It turns out Command Line is quite powerful. Developers use it to communicate with computers to quickly, efficiently and effectively accomplish tasks to the computers’ maximum potentials. It turns out I haven’t been getting full use of my $2,000+ MacBook Pro since I bought it three years ago! I initially felt overwhelmed with all the information I was receiving all at once, but the mentors at Coding & Cocktails were very patient and friendly with me. With their help, I was successfully able to complete the worksheet by the end of the night.

At last week’s Coding & Cocktails event, we learned the basics of version control and how it allows collaboration with other developers on projects. With version control systems, such as Git, software developers are able to simultaneously work on a project without having to share the same computer to monitor what each developer is working on. They are able to communicate with each other using version control repositories, such as GitHub or Atlassian’s Bitbucket. Developers can use the Command Line to work on their version control projects, so I was able to apply the skills I learned at Coding & Cocktails last month to complete my worksheet and homework on Git in class.

I’m thankful affordable and flexible coding opportunities like Coding & Cocktails exist for novices like me. Some courses cost thousands of dollars, but Coding & Cocktails only costs $25 per session and it includes food and drinks. I also appreciate that there are several mentors available to help, and they will stick with you until you understand the concept. And since software development is still a male-dominated field, women have the opportunity to learn how to code without feeling intimidated or awkward. Another great perk about Kansas City Women and Technology’s Coding & Cocktails is there are lots of great resources listed online for anyone who wants to practice their skills outside of class. I highly recommend taking advantage of what’s available for free or at low cost. I can’t wait to learn Front End Architecture at Coding & Cocktails next month.

Admittedly, I don’t currently have any way of using these skills I’ve learned over the past couple of months outside of Coding & Cocktails. However, I know I will have to use Git or some other version control system for a journalism-related project in the near future, whether that’s developing or updating my media outlet’s website, or gathering data for a story. Hopefully, my skills will be sufficient enough for my resume to stand out by the time that happens.