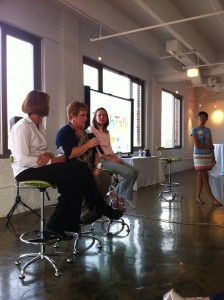 Last week, Kansas City Women in Technology partnered with some great groups to bring you the first ever TechTalk. We had three great panelists and a lot of really exciting discussions about women in technology and the workforce in general. Even though it was a standing room only, completely sold out event, I know there are people who couldn’t make it, so here are some of the big questions we had.

Soft Skills versus Hard Skills
The women on our panel work with teams of technologists. Many in our audience wondered if they felt that their soft skills, like the ability to communicate effectively with others, suffered as they gained more knowledge about the technology side of things. Kim Van Dyke, who has a background in sales, was adamant about the need for the two skill sets to work together. Having a team of wonderful, brilliant minds won’t get you anywhere if you can’t talk to them.

Aha Moments
We had a lot of discussion around what in their lives caused these women to choose the technology field in the first place. For Anna Nelson a professor made a recommendation to take a particular class. By her own account, she had never really considered computer science up to that point, but sort of fell in love with it in that course. Fell in love are my own words, though. I didn’t get a chance to follow-up with her on what exactly about that class was her turning point, but I sort of hope that it was a ‘yeehaw, this is fun’ moment!

But then what?
The “Yea, but now what” question is one that rages through everyone’s minds. Suppose I’ve decided I want to be a frontend developer (a group that I lovingly refer to as Frontendians), but I don’t even know the level of my ignorance let alone know where to begin finding resources to teach myself. Hopefully you have a company culture like Lisa Johnson described for us where there are dedicated groups for employees to participate in. Westar doesn’t necessarily provide Development 101 courses, but that doesn’t stop these groups from providing support and camaraderie in the office for both men and women.

Throughout the evening, one thing was always at the center of the discussion: having a willingness to never stop learning is a key element to being able to make your next steps.

What are your next steps?