Sara Heins and Ashley Sullins studied different academic majors as undergraduates at separate Missouri universities, but it was their respective positions at Red Nova Labs in Kansas City, Kan., that brought them together in their journey toward coding-based careers. Now, they find themselves sitting just feet apart at a different company as they work toward a goal that both admit wasn’t really on the radar even five years ago. The two women helped lead Kansas City Women in Technology’s first ever DjangoGirls workshop in June, which introduced ~75 women to web development. Sara & Ashley will cover front-end architecture in their Coding & Cocktails program in September. 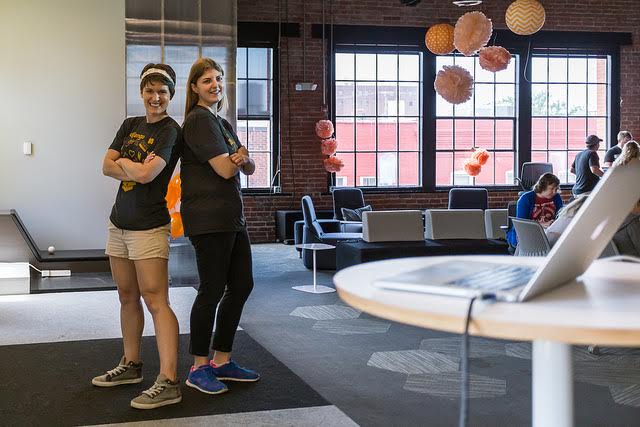 Sara Heins earned a bachelor’s degree in Journalism at the University of Missouri-Columbia in 2012. After working as a content writer at Red Nova Labs for a year, she transitioned into a web developer role after seeing what her co-workers on the development and engineering side of the business were creating. She continued her education through several classes at Johnson County Community College; online resources like Codecademy; and reading the Head First book series published by O’Reilly Media. Heins has worked as a front-end developer at Big 6 Media since September 2015, and her KCWiT mentoring role began in January. Her outside interests include running and serving as an occasional foster parent for cats and dogs through KC Pet Project.

1. How did your interest in coding begin?
I had no previous interest in anything to do with IT or tech. Any time there was something to troubleshoot on the computer, I didn’t want to deal with it. It wasn’t really until I was working in the industry that I saw that it was really more about problem solving and not always just about technology.

2. How has your technical knowledge transferred into other aspects of your life?
I can troubleshoot things with more confidence now; like, “Why isn’t the sound working on my TV correctly?” It seems so trivial, but now I’m like, “Okay let’s go figure it out.” Even in taking my dog to the vet, I now make a list of information, because I think in that way now of how to solve problems, so that the vet doesn’t have to run a bunch of expensive tests.

3. What do you enjoy most about your work?
I like creating something from the ground up. You start with this mock-up of a website, and then you create this really cool-looking page. I’ve never been an artistic person, but someone is able to give me a mock-up of something, and I can then create it. I am able to be creative without necessarily being artistic.

4. What are the more challenging aspects of your career?
Sometimes, I am given a project, and I have no idea where to start. In those situations, I now know that I can figure almost anything out. Sometimes, that’s stressful, but it usually works out in the end.

5. What advice would you offer your younger self today, or to someone who is looking to shift careers into one that is more coding-based?
Get involved with Kansas City Women in Technology earlier. Find a mentor outside of work to help you learn. A lot of this stuff is really hard to do on your own.

6. If you could tell the general public one thing about software engineers and what it means to write code, what would it be?
It’s more about finding new ways to learn and solve problems than being that stereotype of a 40-year-old virgin sitting in his parents’ basement. If someone had told me five years ago that I would be doing this, I would have said, “Why? This doesn’t sound like fun.” It really is more than just about technology. It’s about finding new ways to solve problems.

7. How do you envision STEM evolving into our daily lives?
I’m just hoping that we will encourage younger women and girls to learn more about computers and software engineering. If we can get them to learn about it when they are younger, they can study it in college. It was such a good fit, and I feel like I should have been studying it in college, but nobody ever said to me, “Hey, you should do this.” 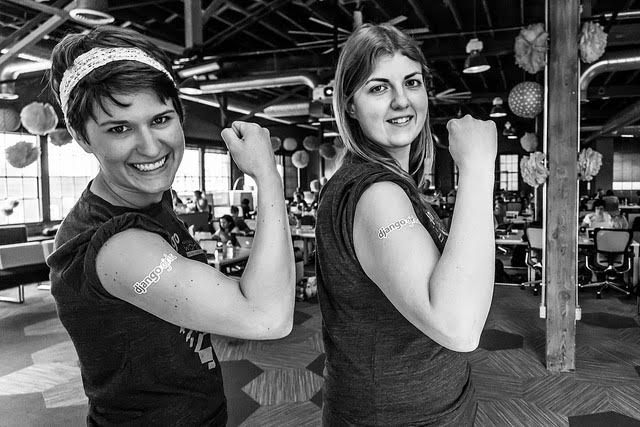 Ashley Sullins received a bachelor’s degree in Business Administration at Park University in 2010. Upon graduation, she was unsure of the exact career path she wanted to take. Because of her intern experience with a company that marketed for doctors’ offices, she then worked for a related startup company in the operations division, where she worked alongside developers, sparking an old-new interest. “In middle school, I had made smaller websites, but I had never met developers in person, and I didn’t know it was an actual career track,” Sullins said. Last year, she completed the five-month developer boot camp Epicodus in Portland, Oregon, after she had previously worked at Red Nova Labs in quality assurance and project management. Sullins began working as a front-end developer for Big 6 Media in January 2016, and one month later, she joined Kansas City Women in Technology as a mentor for Coding & Cocktails. She also enjoys circuit training-related workouts and participating in charity-based 5Ks and 10Ks.

1. How did your interest in coding begin?
From a young age, my peers were all involved in sports, but I was bad at sports. When I was making websites, I wanted to win awards. So, when I made fan sites for a book series, it felt like I had won something and accomplished something.

2. How has your technical knowledge transferred into other aspects of your life?
I know that my technical knowledge has made me more persistent. For example, my mom had a computer problem with her Windows operating system. I haven’t used Windows in years, but because of my day job, I was able to debug the issues and find out what was going on. Also, it’s about persistence: You have to keep going and find out solutions. Sometimes, like when I was younger, I would give up before trying all of the different options.

3. What do you enjoy most about your work?
I think I enjoy the independence of my work. When I was a project manager, I had to tell other people what to do for me. Now, I am able to pursue action items as I want, and I have more control over my day-to-day life.

4. What are the more challenging aspects of your career?
I think one of the more challenging aspects is pressure. If a client finds an issue, it has to be found and resolved immediately. As a green developer, I am still finding out my skills, so sometimes, it can be a little stressful since I don’t have the experience of a senior developer. It can be fun, too, because it does help me grow as a person.

5. What advice would you offer your younger self today, or to someone who is looking to shift careers into one that is more coding-based?
I enjoy development now because of the experience I had throughout my career and the non-technical positions I had. I recommend starting out in a non-technical based track like QA or project management and seeing if you enjoy it first. Ask questions of different developers in the field. Give yourself time to figure things out, and don’t get overwhelmed. It’s okay to feel like you don’t know what’s going on.

6. If you could tell the general public one thing about software engineers and what it means to write code, what would it be?
I think the biggest thing for me, when I was in a non-technical role, I thought I wasn’t smart enough or that I wasn’t math-minded enough. The biggest thing is needing patience and being able to problem solve and see how things are connected. It’s not as intimidating as it sounds.

7. How do you envision STEM evolving into our daily lives?
When you’re in high school or middle school, and you have to take French or Spanish for a semester, I feel like computer science should be one of those classes that you should have to take to see if you have any interest in it. With girls, they especially don’t always have the opportunity to get that initial exposure. It sounds like it is already happening in some schools, so I am hoping that in the future, computer science won’t be a certain subsector; it will be another language like English that we can use as a communication tool.

Adrianne DeWeese is a Media Analyst-Account Coordinator for Synoptos Inc. A member of the KCWiT Marketing & Communications Committee since June 2016, she also enjoys pursuing a Master of Public Administration at the University of Missouri-Kansas City and serving as board chairwoman of Pages & Chapters, a Kansas City- and Washington, D.C.-based family literacy nonprofit organization. Adrianne is married to John Leacox, a dedicated software engineer, and she believes in equal educational rights for everyone and hopes that sharing the stories within KCWiT will inspire others to also pursue their dreams.