Bill Ayakatubby has been with CoderDojo KC from the beginning, first as a volunteer and now as its program director. Diversity, especially among technology-focused careers, is important to Ayakatubby as a gay man, he said. “I feel really strongly about promoting diversity in all ways,” said Ayakatubby, a senior software engineer at The Nerdery. 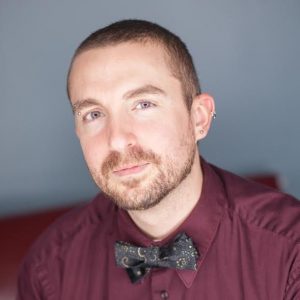 Ayakatubby, who studied at DeVry University from 1999 to 2002, said he remembers the day that he realized he wanted to work with computers for a career. He told his mother, who was then homeschooling him, and she said it was okay. Ayakatubby researched formalized schooling, and by age 16, he was already in college.

His involvement with CoderDojoKC began in October 2013, as Ayakatubby wanted to get involved with Kansas City Women in Technology without feeling like he was intruding too much as a male engineer. As CoderDojoKC program director, Ayakatubby said the aim continues in reaching out to more diverse populations, including low-income families and communities of color. With about 65 children attending each session, Ayakatubby said the program reached a high point this summer with a record of 91 children in one session. “It was really energizing, and all of the kids really pitched in to help each other, which was perfect,” he said. “We really want them to learn by teaching.”

How did your interest in coding begin?
I can remember coming home from school one day, and my parents had purchased a computer. They didn’t tell me that they were going to purchase it; it was a complete surprise and shock. I remember playing around with it and finding out shortcuts immediately. I was playing around with the batch script, and I started teaching myself batch scripting. I was probably only 11 or 12, if I had to put an age on it. In the meantime, I took the computers merit badge course in Boy Scouts, and you had to write a program in BASIC. I did that, and then I went home to try to find the BASIC compiler, and I didn’t have one, so I went to a friend’s computer. Then, we got the Internet, in ‘97, and the whole world opened up for me. I started to make really simple websites, and that started my web development interest.

How has your technical knowledge transferred into other aspects of your life?
It has transferred in analytical thinking – I’m a role player, so when I met my husband, he got me into Dungeons & Dragons. I was able to quickly analyze the role that I was in. At the same time, I have found that a lot of my hobbies have transferred into technology. Role-playing is all about being creative; software engineering is a science as much as an art. Soft skills are so important in software engineering, too.

What are the more challenging aspects of your career?
There is always something more to learn! You are never caught up. It can feel like you are behind. You kind of have to learn to be comfortable with that. It’s kind of scary and intimidating. I took a detour from web development for a while, and when I returned, there was a whole set of new tools that I had to learn. I relied on my peers and popular blogs and people in the industry to figure that out. I am really happy that I did.

What advice would you offer your younger self today, or to someone who is looking to shift careers into one more coding-based?
Learn the basics first. When I learned the foundation of C network, it taught me to be a conscientious developer and considerate of the PC resources. It gave me a little bit of insight into how not to be wasteful or so inefficient with your programming. Having that foundational knowledge with C programming was probably the best thing that I could have ever gotten out of my academic career.

If you could tell the general public one thing about software engineers and what it means to write code, what would it be?
It’s easier than it looks. I think it’s true. Programs look complicated because they look really polished, and they do really cool things, but each of those things is just a function and a composite of other really cool things. When you start to think about the problems analytically, it’s just a bunch of little problems to solve. Once you’ve solved them, you’ve written your software.

How do you envision STEM evolving into our daily lives?
Computers aren’t going away at all, so everybody has to have a basic knowledge of how computers, smartphones, and technology in general operate. Kids are using computers every day in school now; parents are putting iPads in front of their babies now. It’s a life skill to be able to work with technology. By knowing more about STEM, you are a better user. You can recognize usage patterns more effectively.

Adrianne DeWeese is a Media Analyst-Account Coordinator for Synoptos Inc. A member of the KCWiT Marketing & Communications Committee since June 2016, she also enjoys pursuing a Master of Public Administration at the University of Missouri-Kansas City and serving as board chairwoman of Pages & Chapters, a Kansas City- and Washington, D.C.-based family literacy nonprofit organization. Adrianne is married to John Leacox, a dedicated software engineer, and she believes in equal educational rights for everyone and hopes that sharing the stories within KCWiT will inspire others to also pursue their dreams.